This is an automated reply. DCI Tom Pathford has been reassigned. This e-mail address is no longer in use.

Phil,
This is nothing to do with overtime. That was just a boring e-mail title that I came up with in the hope that no-one else would want to read it. The fact that I bothered should give you an idea what this is about.

Look, you know me. I'm not a conspiracy theorist. I'm not a boat rocker. I just do the job in front of me and go home. I'm usually the guy at the back with one eye on my pension and the other on the clock. But not any more. And when the work-to-rule coppers are worried then there really is a problem.
I suppose it started with the Box Tunnel purge. Those of us that kept our jobs after that considered ourselves damn lucky. Wyndham seemed pretty harsh, but he managed to get the killer which is a damn sight more than that so called 'task force' He was a clean broom through the department. The amount of officers that he fired or reassigned in that mess was a wake up call for all of us.

At the time we just viewed it as a bit of a shake up at the station. And of course we were all busy jockeying for positions that had suddenly opened up to really pay attention. Promotions through the ying yang. Too busy to ask obvious questions, such as: exactly what department is Wyndham from, exactly? And why did so many officers transfer without farewell drinks? Or even cleaning out their lockers?
I should have opened my eyes. I should have paid attention. But it's the biggest lies you over look. That something so big, so audacious could could be pulled off right under your nose.

But there is something rotten in this police station. Something not right. Too many secrets, too many corners being cut, too many files being altered, too many bodies disappearing. I heard PC Hanly joke that we should put a revolving door on the morgue. The next day his desk was empty. Apparently he 'transferred'. Which is all very well, but why was his car still in the car park?
God, I don't want to say what I think is happening because it sounds insane. Others can see it, I know they can. They don't want to meet my eye. Sometimes the tension in this office. it's stifling. I just don't know who I can trust anymore. Who's in their pocket. But we came up together. I know you. If there is one man in this station that can't be brought, can't be intimidated, it's you. I hope I'm right.
Given your clearance you probably have a better idea of what's going on than me. We need to meet up. Pool our information. Figure out who we can trust.
Don't leave me hanging mate.
Gerry. 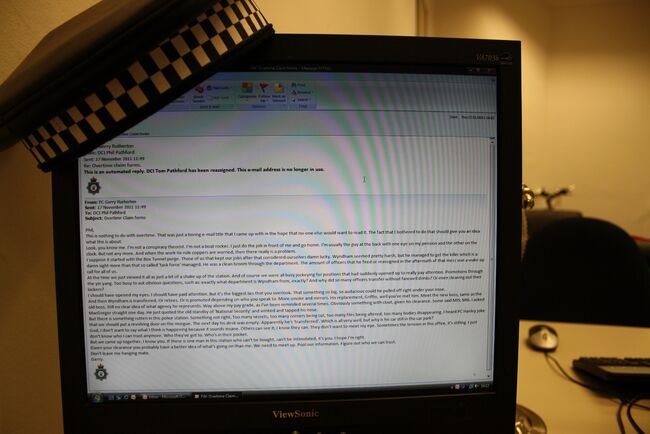