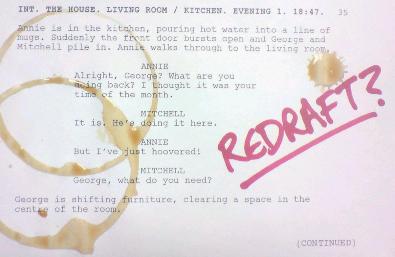 Who would be a scriptwriter, eh?

Countless hours locked away with nothing but a laptop for company... the clickety-click of keys echoing in your ears as you write thousands upon thousands of words... only to delete them and write them again. And again. And probably again after that. Then, after checking your facts and dodging the perils of writers block, you finally submit it to your producer. Who makes you write it again... fifty times.

What kind of a madman would voluntarily choose that existence? Who could possibly endure that kind of torturous profession? Who, I ask you... WHO!?

Step forward Mr Toby Whithouse, the legendary creator of Being Human. Without his sacrifice of man hours and sanity, we wouldn't have the drama we know and love today. But what did that original script look like? Well, thanks to Toby and the BBC Writersroom, you can now click here to download the script directly to your computer (which is good because I don't have nearly enough stamps to post it).

Downloading the script gives a from-the-horses-mouth insight into what Toby wanted to achieve in each scene, and even shows how the finished product varies from the ideas that were in Toby's head all those many months ago.

And a message to all the other budding writers out there, don't miss the other fantastic tips, advice and information that the Writersroom has to offer.