THE MUSIC OF BEING HUMAN: THE DARKEST SOUNDS YET 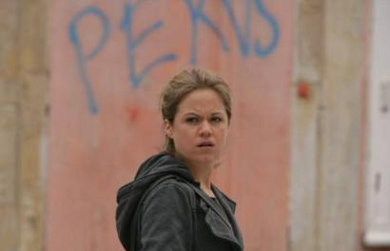 In the latest in our series looking at the music of Being Human, Alex Pillai, the director of episodes 3 & 4, tells us how he took the show to its darkest place yet...

Mitchell, in attempting to reject his vampiric side, and recapture his human nature, inadvertently rouses the hostility of the local neighbourhood, and causes the death of a child.

Though funny in parts, Brian Dooley's script is suffused with Mitchell's doomed yearning. Even whilst planning the episode, it was not clear how this contemporary music track would fit into such a painful vision.

Luckily we have been blessed with the gifted composer, Richard Wells. He immediately caught onto the clashing emotions within the piece, and produced an original soundtrack that evokes both yearning and fear.

Listen to the complicated time-keeping of the guitar on the track over the crowd rioting outside the house - it is both melodic, and yet dissonant. Similarly, Richard was able to perfectly capture Fleur's elation on seeing her resurrected son again at the train station - mixing joy with her terrible fear. As poets would tell us, the perfect Horror is that which mixes attraction and repulsion, and Richard Wells' music for this scene, shot at Temple Meads station, has both these strands, pulling emotionally in opposite directions.

In editing such a sensitive piece as episode 4, where a child's welfare is at the heart of the issue, the control of tone was an essential part of my work, so that the story would be palatable. With that in mind, I decided to keep other people's music out of the episode, so as not to dilute either Brian Dooley's voice, my own, or that of Richard Wells.

The exceptions to this are the opening and closing sequences, where we are with Mitchell's solitude and despair. These are universal moments - we've all had that existential' waiting in the rain with a cigarette' moment (even if you've never smoked!).

I have been a long time fan of Brixton-based Alabama Three. Their mix of guitars and vocals always seems to evoke the gothic darkness of the Louisiana bayou, home of Anne Rice's vampires. When we put 'Don't call the Doctor' on the opening, the music just seemed to be coming out of Mitchell's head - when Larry Love, Alabama's lead vocalist, tells us "I'm in a lonely place", that is exactly what Mitchell is feeling.

Mitchell's defeated trudge to rejoin Herrick at the end of the episode has the hopeless air of someone who has partied too hard, and is washed out and washed up. 'Sad Eyed Lady of the Lowlife', again from the 'La Peste' album (2000) by Alabama Three, creates a neat musical loop with the opening - Mitchell has tried, and failed, to be human.

(Note - The BBC is not responsible for the content of external internet sites.)