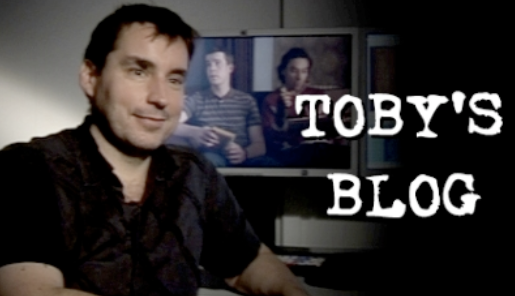 Toby Whithouse, the creator of Being Human is back to answer more of your queries. If you missed previous blogs, check them out here or here. But this week, it's that pesky subject of vampire ID badges. Over to Toby for more...

Ok, so a mixed bag of notes and queries this week...

PriorMarcus asked about vampires on cameras. I think this raises a bigger point about the world of Being Human...

Firstly, some eagle eyed viewers might have noticed that Mitchell actually wears a photo ID at the hospital. What the Art Department did, was take a photo in black and white of Aiden in First World War-ish clothes, the cut out the face and use that as his ID. The presumption is that when asked for a photo, he gave them a photo he had from his pre-vampire days.

As for the CCTV, I think it's only an issue if someone is looking directly at him and directly at a corridor or room that he's actually in, at the same time. It wouldn't necessarily occur to anyone watching the footage that they've never seen a specific cleaner on there.

But yes, with Herrick it's much more difficult. Obviously security camera footage is a relatively new invention, but as Mitchell says in episode 1, vampires have existed for tens of thousand of years, they've become supremely skilled at covering their tracks. There are vampires strategically placed in all jobs and institutions. Consequently Herrick is never acting on his own. Using the example of CCTV footage being used in a court case, it would be the easiest thing in the world for them to arrange for the footage to go missing, a witness to be intimidated or for the case to collapse before it went to court.

One thing I've always insisted on with this show is that it's taking place in our world. I absolutely adore Doctor Who, but one thing I specifically wanted to do to contrast with that show was to keep this very much our world. In the Doctor Who world, the population know aliens exist. They get invaded every Christmas. But in the Being Human world very few people know of the existence of these creatures. Consequently, when people see someone not appearing on a CCTV camera, their first thought wouldn't necessarily be "He must be a vampire". And if they did think that, they wouldn't necessarily tell anyone. One of the many tools vampire's employ to stay hidden, is people's scepticism.

PsionicP3 asked how much time I spent on set.

Not as much as I wanted. But I was still writing the scripts while they were filming. But I'd be sent a DVD every day of the previous day's filming. It was such a joy watch the show gradually take shape. The advantage of this is summed up by Sinead Keenan, who plays Nina. I was never really sure what to do with that character and we were contemplating writing her out by the end of the series. But watching Sinead's terrific performance take shape every day made us realise we'd be crazy to let her go, and because I was still writing the last episodes meant I still had time to shift the climax accordingly.

Right, that's your lot for this week. Next week... Why can't Annie change her clothes, and what does Mitchell have on his Ipod. Übersetzt nach: