THE MUSIC OF BEING HUMAN: PART ONE 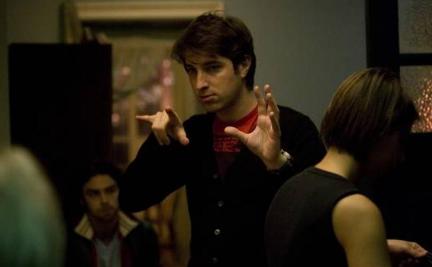 After being flooded with comments about the soundtrack of Being Human, we've done a bit of digging into why certain tracks were chosen. Here Toby Haynes, the director of Being Human episodes one and two, discusses the reasons he chose such iconic tracks...

When I read the scripts for Being Human I was totally blown away. I love horror, especially Werewolves, so Toby Withouse's script was the closest thing to 'An American Werewolf in London' I'd ever read. It was brilliant.

I was immediately filled with an overwhelming sense of protection over the show. I didn't want it to fall into the hands of someone who didn't understand the genre. It needed to be bold and punchy, cinematic and personal, also with enough nods to the archetypes our characters had emerged from.

I felt the music in the pilot had been particularly successful in places. Its use of Amy Winehouse's 'Rehab' seemed to really sum up the concept of the show, without being gothic or obvious. This, I felt was the key; songs that sum up the moment, emotion or action, the lyrics had to have relevance. This also sits well with Being Human's spiritual granddaddy 'An American Werewolf' where John Landis only used tracks with the word 'moon' somewhere in the lyrics, genius!

It was all very well to say all tracks had to have relevance, finding them was much trickier than I thought. I put out a challenge to the crew to come up with songs that had the words Vampire, Ghost, Wolf, Blood, Moon, Change, etc in the lyrics or title. This was a mistake. Every time I would walk onto set, or down a corridor someone would jump out and shout "Killing Moon!" or "Ghost Town!" which was very distracting. I ended up with a huge database of horror related songs, but during the editing process a lot of them just didn't fit. I realised that because the show was about much more than just ghosts and ghouls, the music had to also reflect this complexity.

One of my favourite tracks in opening episode was The Arctic Monkeys' 'When The Sun Goes Down'. It sums up Georges predicament perfectly without being all wolfy and on the nose about it. This was a suggestion from Ross Sellwood our music advisor (who does loads of work coming up with good ideas that I callously ignore, so it's great he got one through here!). It's also a good contemporary track; this always relaxes the execs when they know we're appealing to our demographic instead of indulging our love of obscure Death Metal B-sides.

I opened each of my episodes with the Supergrass track 'St Petersburg', which has a sort of melancholic thoughtfulness about it that chimes with Annie's look, taking us into the opening titles.

Johnny Cash's 'Hurt' was a last minute thing Matt [Bouch the producer] and I came up with in the Sound Mix. We'd wanted to reprise the St Petersburg track, but it just didn't sit right with the mood of the scene - where Mitchell is sitting shaken by the death of Becca. HURT with its feelings of regret and consequence really captures the house mates mood at this time.

In Episode 2, I wanted to sum up the weird and dislocated mood George is in after meeting another werewolf for the first time. I found this excellent rare track from The Coral called 'Shadows Fall' which has a lovely eerie, deserted funfair feel to it.

Roachford's 'Cuddly Toy' is on the radio when Tully is doing his little shimmy in THAT dressing gown. "Feel for me Baby!" that's Tully alright. Which brings me to 'The Hounds of Love' which plays out on the café radio as Tully tries to coach George in the dark arts of picking up chicks.

Once again I tried to end the episode with a killer track, and I think Muse's 'Showbiz' really cracks the sentiment here. With George having had to face who he really is, and Mitchell struggling with his addiction, I think the opening line of the song is something like "controlling my feelings for too long..." ooh, feel the relevance!

It was an intense and exciting experience making Being Human. The quality of the show is testament to the talented crew Matt Bouch put together, all working to bring Toby Whithouse's words to the screen unharmed. For me it was a privilege to kick this genre-bending series off on a journey that will hopefully play out over many seasons to come.

Anyway, that's it for my Episodes, check out the list below its got all the tracks and artist we used in Episode 1 and 2 so enjoy!

Smack my Bitch Up - The Prodigy

When the Sun Goes Down - The Arctic Monkeys

Take Her Back - Pigeon Detectives

Something Inside of Me - The Coral

The Hounds of Love - The Futureheads

(Note - The BBC is not responsible for the content of external internet sites.)